Carolina Reaper beef jerky with caution on this wildly popular flavor… our friends who like extreme heat kept asking for an over-the-top fiery jerky that is full of flavor. We listened and decided that there would be no better option than to make some jerky with Carolina Reaper peppers, since it holds the world record for the hottest chili pepper in the world.

Most normal humans would say that this level of fiery heat is a bit insane, and when we sample at events… this is the only flavor we don’t sample.  We were hesitant to sell a flavor with this much fire power and putting together a recipe with such extremes was out of Jeff’s personal palate range, so he reached out for help with the requirement that the final recipe had to also have tons of authentic Carolina Reaper flavor.  It has been a popular jerky flavor ever since the release. Not only is it available from our website,  but many retailers carry it as well.

Need a great gift idea? Everyone has one of those rare friends or colleagues who taunt you and dare you with their special prowess with enjoying really hot foods.  This flavor is for them! 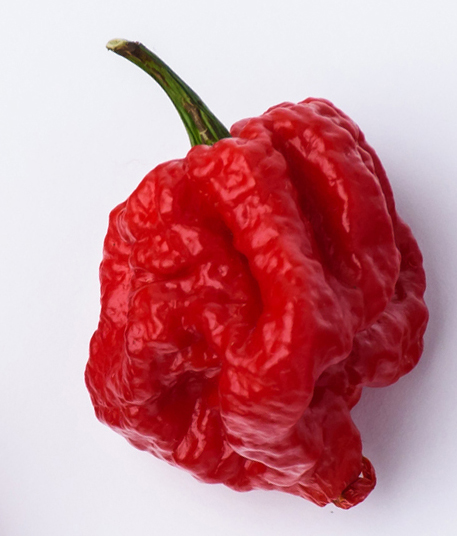 “This jerky delivers the full, rich flavor of Carolina Reaper chiles, with its pungent, earthy, yet floral signature. Fans of chile peppers will also get that endorphin rush that comes with the Reaper’s capsaicin surge. But this jerky is more than just a fiery-hot chile pepper, it’s actually based on a great teriyaki marinade and meat consistency that Jeff’s Famous Jerky is known for. I love the tangy chewing, fruity character, and the soft, steak-like chewing texture. This jerky has full Reaper flavor, not just heat.  This is a semi-moist, and tender jerky. The initial bite is soft yet meaty, and once chewed down it feels almost like filet mignon.”