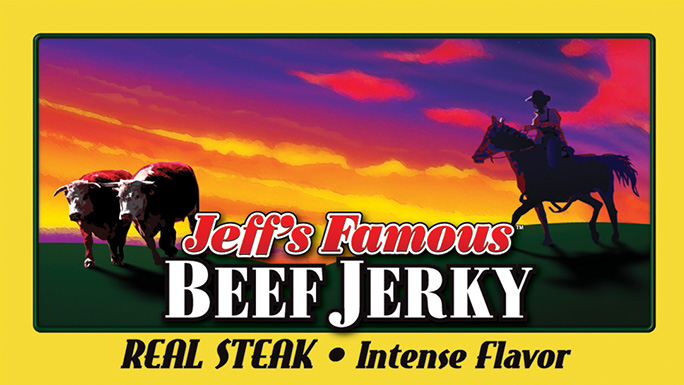 Gourmet Jerky Moving Ahead as Next Big Snack Trend

Mission Viejo, California   The gourmet jerky market share is an explosive artisanal new niche in the snack industry, recently predicted by Forbes Magazine to be the next big food trend.  One small Southern California company is leading the way with more multiple awards than any other beef jerky company.  Jeff’s Famous Jerky started humbly in 2010 with only a $2000 initial investment and it has expanded quickly with an army of independent distributors in more than 30 states.

Founder Jeff Richards says, “Our beef jerky is nothing like the shoe-leather consistency convenience store variety jerky that most people are used to. We use only premium cuts of real steak in super premium fusion marinades that produce a soft and tender, mouth-watering intensely flavored beef jerky, made without any chemical preservatives.  Our eight award-winning flavors of beef jerky are flying off the shelves.  In retail stores, it is not uncommon for our brand to be the number one selling jerky in just a few weeks.”

What’s the difference?  Most of the beef jerky that is produced for sale consists of highly-processed, chopped and formed meat, rather than using sliced, whole muscle meat like Jeff’s Famous uses.  These artificially produced products generally have higher fat and water content and are tough to chew. If you read the fine print, you will notice that instead of using strictly American beef many of the largest beef jerky companies frequently use foreign beef and the ingredients usually include MSG and Sodium Nitrates.  “The major brand jerky companies that control the industry have been taking short cuts for decades with sprayed on marinades and sub-standard quality beef choosing higher profit margins over producing a healthy, quality product for the consumer”, says Richards.  “In recent years, these big companies have begun to introduce their own spin on gourmet flavors, but every good cook knows that you cannot produce quality a product without quality ingredients and superior recipes.”

Jeff’s Famous Jerky recipes originated when founder, Jeff Richards began experimenting with jerky recipes in the early seventies.  Some of the original recipes were fine-tuned for over 30 years.  In 2010, after three years of working on all aspects of the concept, Richards teamed up with long-time friend and business colleague, Mike Aggarwal to launch the company and they soon opened a corporate office in Mission Viejo, California.  Eight flavors of award-winning gourmet beef jerky is offered including Old Fashioned Original, Sweet Teriyaki, Black Pepper and Sea Salt, Jalapeno Carne Asada, Cranberry Jalapeno, Cajun Style, Orange-A-Peel and Habanero Heatwave.  The perfect, healthy snack alternative, each bag of their jerky contains 30 grams of high quality protein that is 97% fat free with no added MSG or Sodium Nitrates.

Purchase Jeff’s Famous Jerky on their company website; JeffsFamousJerky.com, on SamsClub.com and at a growing number of retailers across America including some branches of 7-11, AM/PM, CVS, Walgreen’s and many more.  For information on becoming an independent distributor to retail stores or vending their jerky at events, contact Jeff’s Famous through their website.