Bacon jerky used to be available from a handful of companies prior to 2013, but it was greasy and the quality was not that great however the companies who carried it still sold lots of their version of bacon jerky, but that is no surprise… it’s bacon.

Bacon jerky took a big turn in quality as the craft jerky movement had already been in place for a few years.  Jeff’s Famous Jerky introduced their craft version of bacon jerky in early 2013, the same year some of the major jerky companies started bringing their generic bacon jerky offerings to the marketplace.

“We weren’t the first to bring bacon jerky to the public,” says, Jeff Richards, CEO/Founder at Jeff’s Famous Jerky, “but we were the first to make it as a true gourmet premium bacon jerky product. We introduced our thick gourmet bacon jerky by introducing three flavors in April, 2013. Since then many, many companies have followed with an introduction of their own versions. Bacon jerky is high in protein and generally has less fat and sodium than typical pan fried bacon.  Plus it is totally shelf stable and portable… making it the perfect on-the-go high protein snack.”

Many countries throughout the world have consumed salted and cured pork throughout history. Bacon has many different styles internationally and a few manufacturers today have taken this extensive history and turned bacon into a masterpiece of culinary flavors.

When we look towards the past and the first mentions of bacon, the word actually comes from a Saxon word that originated near the first millennium AD. Bacoun was the original spelling for the word and this wasn’t always the phrase that would refer to cured cut pork. Although it took up until the 11th century for the idea of bacon to be widespread butchers were beginning to cut pork belly, and loin in the same way that we cut bacon today as well as begin to breed animals who could produce tastier meat in these areas. 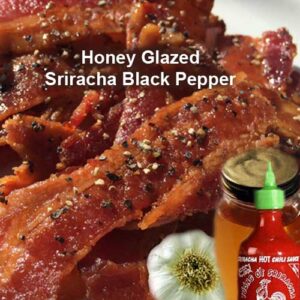 In the 12th century Bacon became more of a breakfast staple especially in England. Around this time we started to hear the phrase “bring home the bacon” which was originally a grand metaphor for a healthy marriage but has since evolved into a term for bringing home income to family.

Although Bacon quickly became a staple of breakfast foods it wasn’t until the 18th century that people began to produce and cure bacon in the same manner that we enjoy it today. The quality of bacon improved through the 18th and 19th century until the industrial revolution in which the recipe for bacon turned into a more traditional form of the manufacturing process.

Bacon jerky is now a very popular snack item. But there is a big difference between the true gourmet craft version and the now mass-produced variety offered by giant jerky companies.  It is sometimes called Candied Bacon because of a heavy sugar glaze. Bacon jerky as a great portable shelf stable snack you can take anywhere is perfect. When it comes to finding the best bacon jerky, we highly suggest trying true craft bacon jerky first. You will never go back to the generic mass-produced bacon jerky again.

We introduced the first real gourmet bacon jerky in 2013, but Jeff had already spent five years trying to figure out how to do it.  They said it couldn’t be done because bacon contains too much fat to make it into jerky, but he knew there was a way.  One day when he was driving home in traffic for five straight brutal hours… by the time he got home he totally figured it out.  That night he created three flavors and the next week, he brought it to the manufacturing plant to discuss making it.  People went crazy and a few months later we introduced the first real gourmet bacon jerky to our customers. Within a year the copycats arrived and created their cheaper versions, but very few brands taste as good as the original. We still use the same thick, super premium bacon for ours and it sure makes a difference in taste.