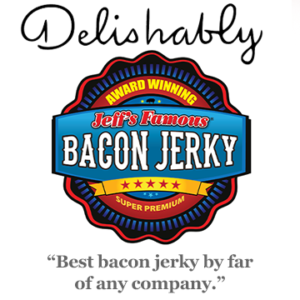 Maple Brown Sugar Bacon Jerky that is GLUTEN FREE and uses 100% real Maple Syrup and Brown Sugar highlight the insanely deliciousness of our extremely popular Maple Brown Sugar bacon.  Lower in sodium than most bacon jerky. Some would call this more of a candied bacon than a jerky, but the advantage it has by turning it into jerky is that it is actually contains less fat than pan-fried bacon and it is totally shelf stable. Our bacon is crisp, not greasy.

THE PERFECT GIFT: Do you know anyone who doesn’t LOVE bacon? Take some to your office and amaze your friends.  Bring some on your road trip or your next flight. You NEED bacon.

We introduced the first real gourmet bacon jerky in 2013, but Jeff had already spent five years trying to figure out how to do it.  They said it couldn’t be done because bacon contains too much fat to make it into jerky, but he knew there was a way.  One day when he was driving home in traffic for five straight brutal hours… by the time he got home he totally figured it out.  That night he created three flavors and the next week, he brought it to the plant to discuss making it.  People went crazy and a few months later we introduced the first real gourmet bacon jerky to our customers. Within a year the copycats arrived and created their cheaper versions, but very few brands taste as good as the original. We still use the same thick, super premium bacon for ours and it sure makes a difference in taste.

“BACON JERKY! Yes, the miracle breakfast food has been given a whole new breath of life and turned into something even more delicious by Jeff’s Famous Jerky.” -One Cut Reviews

” In our house, this is the ultimate favorite flavor for using as an ingredient in salads… and a little goes a long way!” – Jeff

“This is absolutely the most delicious maple bacon jerky I have ever tasted!” -My Jerky Shop, Colorado