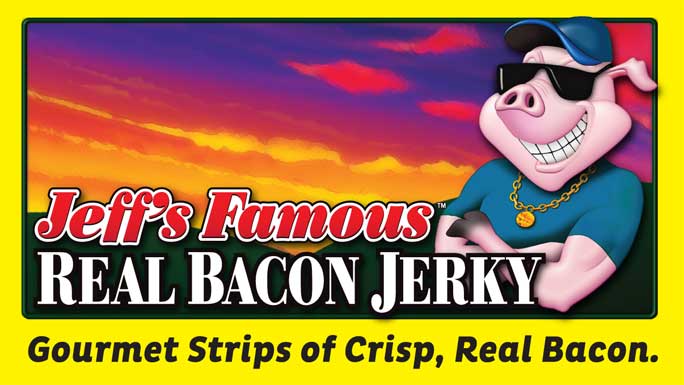 Mission Viejo, California   The gourmet jerky market share is an explosive artisanal new niche in the snack industry, recently predicted by Forbes Magazine to be the next big food trend.

Jeff’s Famous Jerky is no stranger to recognition for their product line of eight gourmet beef jerky flavors. Since they arrived on the scene less than three years ago; they continue to receive awards and professional recognition for their products.  Regarding the new Real Bacon Jerky product release,  CEO/Founder, Jeff Richards says, “Bacon Jerky is a product we have been working on for more than five years.  The current popularity of bacon makes the timing of our product release totally relevant in the marketplace.  Bacon is the next evolution of gourmet artisanal jerky.”

“Our Bacon Jerky,” says Richards was intended from inception on being a superior quality product.  Other companies have produced their own versions and more will be coming, but we believe we have created bacon recipes that will lead the way and set the standard for others to follow.  Everything from the quality of ingredients we use to the unique recipes and the extraordinary cooking process that has taken a team of professionals to develop will make many of our customers very happy for many years!”

Jeff’s Famous Jerky humbly began when Richards began experimenting with jerky recipes in the early seventies.  Some of the original beef jerky recipes were fine-tuned for over 30 years. In 2010, after three years of developing the concept, Richards teamed up with long-time friend and business colleague, Mike Aggarwal to launch the company and they soon opened a corporate office in Mission Viejo, California.  Vice President of Operations and Finance, Aggarwal says, “The growth of our company has been nothing less than explosive and in only a few short years, we now have an army of distributors in thirty states. We just recently began distribution to Guam … not bad for a business born in a weak economy with only about $2000 in start-up capital… and now watch us … we’re ‘makin bacon!”

Purchase Jeff’s Famous Real Bacon Jerky or their full line of beef jerky on their company website; JeffsFamousJerky.com and at a growing number of retailers across America including some branches of 7-11, AM/PM, CVS, Walgreen’s and many more.